Setting Up a Beginner Hunting Rifle 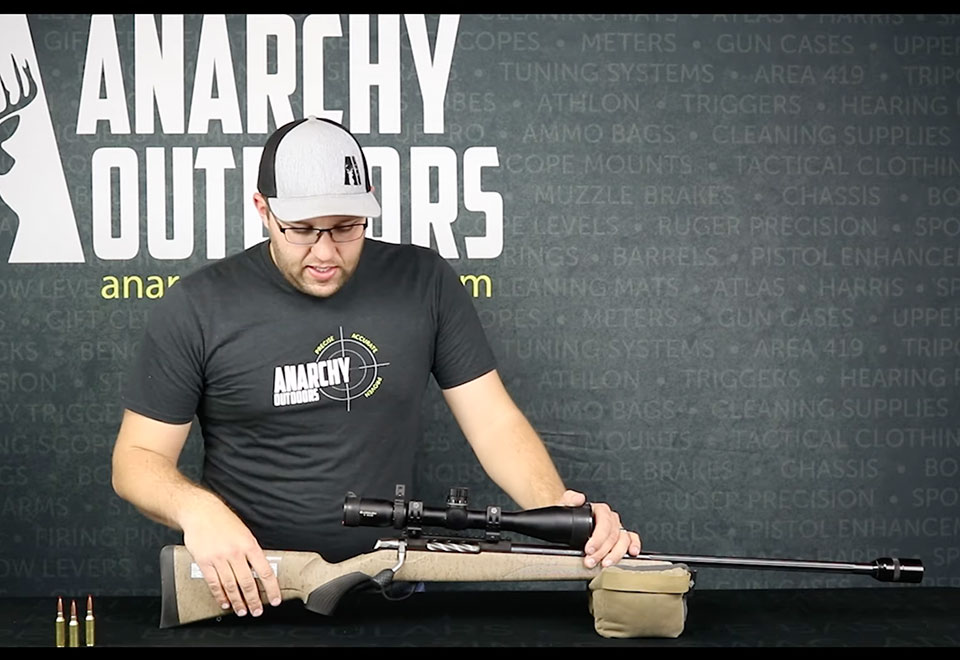 Hunting beginners don’t need to invest in the most expensive rifle. However, there are some things that you may want to consider adding that will make your shooting experience a smooth one. For a beginner, the most important things include the caliber, how the gun feels, optics, and recoil. Cody, from Anarchy Outdoors, has shown us how he has set up his wife’s beginner hunting rifle, so you have an idea of what to consider.

What to Consider in A Beginner Hunting Rifle

When Cody set up his wife’s hunting rifle, he wanted to make sure her gun felt good to her without breaking the bank. There are a couple of reasons for this. First, you can always upgrade later. Secondly, cutting the cost of trying out a new sport makes it easier to get into and less financially painful if you decide it isn’t for you.

Choosing the Right Caliber for The Game Your Hunting

Making sure you have the right caliber for the game you’re hunting is one of the most important things to determine. Oversizing the caliber could lead to unnecessary recoil and meat being destroyed. Undersizing your caliber may only wound the animal. The goal is to have a gun with a large enough caliber to do damage without destroying the meat.

When Cody built his wife’s hunting rifle, he went with a Tikka 6.5 PRC. He picked this gun for several reasons. First, it has more grip and a good palm swell, which makes it easier and more comfortable for his wife to shoot. Secondly, the 6.5 PRC is a good caliber balance for the game she plans to hunt.

When it comes to modifying your rifle, the options are endless. It can get expensive fast. However, it is possible to upgrade your rifle without going crazy.

Cody added a mix of upgrades to his wife’s rifle. To increase the smoothness of running the bolt, he went with Anarchy Outdoors’ Tikka T3 Bolt Handle, one of their many bolt knobs, and an Anarchy Outoors’ Shroud.

Adding a Scope To Your Hunting Rifle

While adding a scope to your rifle makes it heavier, it also makes it easier to hit your target. To maximize the available travel for the scope, Cody added the Anarchy Outdoors 30 MOA scope base to his Athlon Midas TAC scope. Additionally, he put an Anarchy Outdoors throw lever on the scope to make it easier to adjust and Butler Creek scope caps to keep the lenses clean.

Cutting Down The Noise and Recoil

The last thing Cody wanted to do was decrease the noise and recoil of the gun for his wife. While purchasing a suppressor would do the trick, the tax stamp processing time after buying the suppressor can take a while. Additionally, the suppressor can only be used by or with the person who purchased the tax stamp. So either he would have to put the suppressor in his name and never separate during the hunt, or put it in her name and take the chance that she might not want to shoot after trying it out. All the logistics behind adding a suppressor were a little too messy for a first-time hunting rifle. Instead, Cody opted to add the Anarchy Outdoors Full port muzzle brake and a Blast Forwarding Device. The muzzle brake reduces the recoil by about 65%, and the blast forwarding device does what its name implies. It pushes the blast from the gun forward, making it quieter for the shooter.

Choosing The Right Gun For You

When it comes down to it, choosing the right gun for you depends on your preferences, budget, and hunting objective. While the rifle Cody built works great for his wife, it may not be the best setup for you. However, it’s a pretty solid start, especially for those who don’t know what to look for in a beginner hunting rifle.