What Upgrades are Available For The Ruger Precision Rifle? (Part I) - Anarchy Outdoors Nation
15651
post-template-default,single,single-post,postid-15651,single-format-standard,ajax_fade,page_not_loaded,,qode-theme-ver-13.8,qode-theme-bridge,wpb-js-composer js-comp-ver-5.4.7,vc_responsive

What Upgrades are Available For The Ruger Precision Rifle? (Part I)

19 Sep What Upgrades are Available For The Ruger Precision Rifle? (Part I)

Introduced in June 2016 by Sturm, Ruger & Co., the Ruger Precision Rifle leapt onto the world stage in three widely and soon to be highly sought-after calibers: 308 Winchester, 6.5 Creedmoor and the .243 Winchester. As the rifle grew in favorability, the manufacture released two additional calibers, the 6MM Creedmoor and the 5.56.45mm NATO just two years later. But while the rifle became a popular platform, many of the primary parts have been found lackluster and even downright abysmal. Demand for high quality parts allowed aftermarket parts manufactures to jump on the platform and fuel the RPR craze– which I want to discuss with you today.

Now before you get started on changing out parts, I want to remind each and every one individual reading this that you are taking on the responsibility and liability should your rifle malfunction after you add aftermarket items. Neither I nor any manufacture are responsible for you or your rifle if you so choose to remove or modify factory installed parts.

One of the most important items you can buy and/or have at your disposable is a blow-up view of the RPR schematic. As you see from the image up top, the parts breakdown is a great asset to have while working on your rifle. Ruger provides this in each RPR owner’s manual. Now if you’re like me, eyesight is waning in the latter years and having something larger and extremely detailed to reference is paramount. 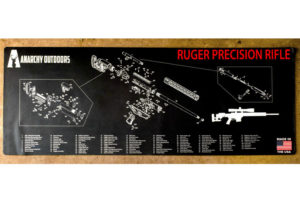 From the beginning, Anarchy Outdoors recognized a need and brought out the first Ruger Precision Rife Mat, doubling as a perfect surface for cleaning your Ruger Precision Rifle while also providing an easy reference point. The soft top protects your gun from scratches while the neoprene rubber backing protects your work surface from chemicals. With the exploded view drawings and accompanying parts list, making repairs, disassembling your firearm, or basic cleaning can be done much faster and with greater enjoyment.

The 1st generation of Ruger Precisions were introduced with a plastic bolt shroud, Allen wrench for trigger adjustment and bolt take down tool. This of course became one of the biggest pet peeves with shooters: having a plastic bolt shroud and parts all stowed at the end of the bolt. This of course was one of the first products aftermarket companies started to develop as a replacement item. First came aluminum representations that were solid pieces CNC’d from high grade aircraft aluminum billets. As the rifle gained notoriety, Anarchy Outdoors introduced RPR shrouds cut from billet Titanium. 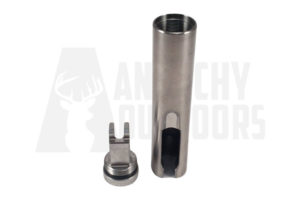 Now one item I see a lot of discussion on is what the biggest difference between aluminum and titanium happens to be? Weight for one, less wear is another. Bolt shrouds actually were developed to cover the rear end of the bolt where parts could be protected from dirt and debris. Ruger developed the RPR with a longer shroud that actually falls back into the buffer tube of the buttstock and helps align the bolt. By adding weight to the shroud, you are increasing the available throw and balance, while cycling the bolt open and closed during reloading. You can find multiple shroud choices at Anarchy Outdoors.

Ruger developed their Precision Rifle around the highly used AICS style magazine and supplied each rifle with two MAGPUL, AICS PMAG units. Now for the everyday user, these will fill the bill of the shooting experience.

However… if you are into Precision Rifle shooting, then working on accuracy is a big part of your life. American Rifle Company (ARC) 10 round (.308 Win) magazine gives you a much-needed enhancement to the basic Magpul PMAG.

Purposefully designed for use with cylindrical actions, the ARC mag offers a compact 10-round alternative to the Accuracy International CS type magazines. The main purpose of upgrading to the ARC magazine is the internal O.A.L. (over all length). This O.A.L. is nominally 2.97 (75.4mm) which allows you to seat your projectiles closer to the lands. This in turn increases your accuracy by cutting down on the jump each projectile needs to enter the barrel during the firing sequence.

One other item that many shooters always ask for is increased magazine capacity, Area 419 answered the call and introduced a truly universal SA +4 magazine extension that increases the ARC mag to 14 total rounds. 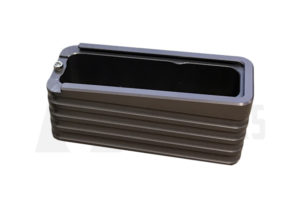 Now it may seem I’m doing a lot of Ruger criticism here but they did do one thing almost right: the bolt knob that comes with the rifle is a nice option direct from the manufacture and unlike other name brand rifles, it does have the ability to be exchange the knob for an aftermarket knob threaded to 5/16×24. One of the largest and most comfortable bolt knobs out there is the Catalyst Arms Hammerhead. Catalyst Arms created this large, oversized solid aluminum knob to provide a secure grip on the bolt handle in any and all conditions. The Hammerhead features a contoured “waist” for pushing bolt knob up with your trigger finger during cycling of the bolt. Additional styles and knobs like one of my favorite ”Dragon Scale Long” can be found here as well.

Now one item that took longer to develop and actually ended up working on both the Ruger Precision as well as the Ruger American was the replacement bolt handle. When Ruger initially introduced the American Action, each bolt came with a downward swept handle which did not align the bolt knob for quick action or implementation of knobs similar to the Catalyst Arms “Hammerhead” design. This downward sweep hindered the shooter from using their finger to start the cycle of the bolt, thus increasing the time and effort to manipulate the bolt. 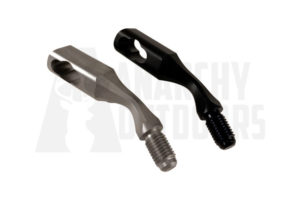 With this in mind, Anarchy Outdoors developed and fielded a new version that increased the angle of the bolt knob as well as pushed it father back towards the shooter. This allowed for each person to use their finger to catch the bolt knob on the upward swing and start cycling the bolt faster when time really counts.

Ruger developed and fielded one of the most intricately designed buttstocks I have seen when they introduced the RPR. Each buttstock came with more knobs and buttons than most high-end adjustable buttstocks are used to. Of course, this lead to some unhappy shooters who, being used to a more traditional rifle stock, had a hard time finding a specific position they were comfortable with. Also, when it came time to pack up the rifle, once again you had to collapse the buttstock enough to fit the rifle into your favorite case for transport. This lead to further frustration with shooters who spent time getting it dialed in just right. Thankfully, Ruger saw in the beginning to develop the rifle with the modular capability inherently designed in AR style rifles. This design option allows the shooter to choose between the multitude of design choices available from Magpul as well as Luth. 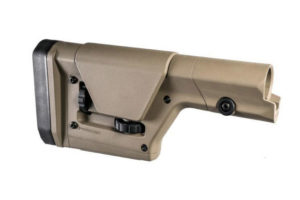 Pictured above is the Magpul PRS (Precision Rifle Series) Gen 3 Buttstock. Found widely throughout the long-range shooting community, Magpul provides a simple to operate yet effective and stable platform to shoot from. Each stock comes in a wide range of colors and can be added to the RPR quickly. One thing that must be noted, however: The PRS Gen3 MUST be mounted with a rifle-length receiver extension for optimal fit and function. 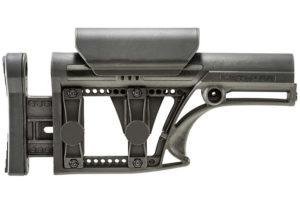 Pictured above (in black) is the LUTH MBA-1 (Modular Buttstock Assembly) which I choose to use with my Ruger Precision Rifle. Each stock comes with simple to operate mechanism which provides the shooter with a comfortable fit and feel while shooting. I found that this was a better choice for me- not to mention it’s also more forgiving on the wallet with its price.

Truth be told, this is just the beginning of the aftermarket parts are available for your Ruger Precision Rifle. Please come back for part two of this series where I’ll show you options for the firing pin, trigger swap, grip, rails and barrel choices that are out on the market. We’ll will show you some of the higher end accessories that will increase your rifles use in the field or on the range. Stay tuned here at https://blog.anarchyoutdoors.com/.